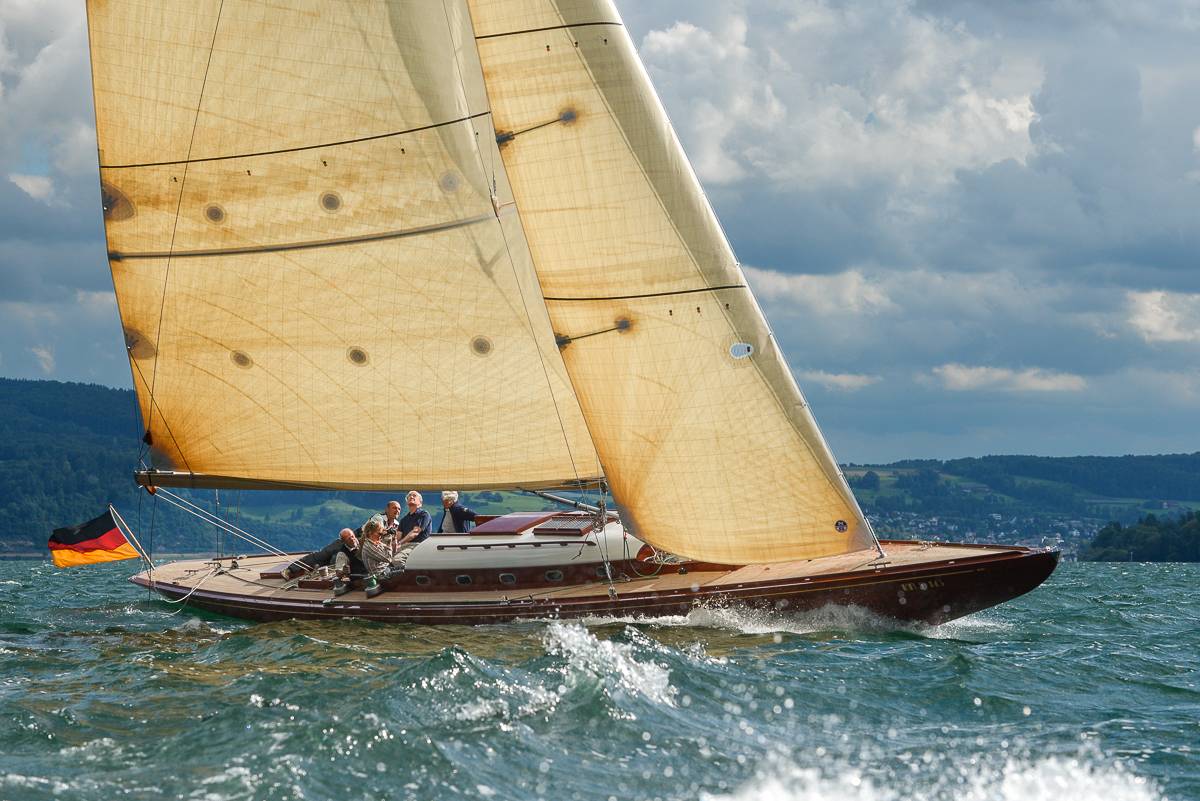 This almost 18-metre long daysailer is so antiquated that at first glance it appears to be a coloured black-and-white foto of times gone by. However, the boat is real and not restored, a new construction from 2017. The sail geometry is also wonderfully from outdated. Three quarters of Gustaf’s sail area is in the mainsail, the rest in the forewing-like small jib. This was the custom in the 1920s, when the 75 square metre boat Gustaf was designed.

How main and jib are balanced

Today, the sails are balanced differently. For example, on the slightly shorter cruising square metre boat Swede 55, a 1975 design, the ratio of mainsail to jib is 60/40. Thus, on Swede 55, the 30 sq m jib is to be replaced by a smaller 20 sq m strong-wind jib from 4 1/2 Beaufort onwards. When the wind picks up, Gustaf reefs the main, while the boat sails through almost any wind with the small jib. A change of headsail will probably rarely be necessary. This is the advantage of 75/25 over 60/40.

Surrounded by a curved coaming, the mast stands in a recess between the cabin superstructure and the forehatch, the so-called mast garden. A rarely seen reminiscence of an almost forgotten era, when yachts were enchanting creations meant to be sailed and looked at: flat-bodied, elegant and made of the most beautiful boatbuilding material, wood.

It is wonderful that the contemporary comfort obsession remained ashore here. A U-shaped saloon in front of the main bulkhead, two lockers and a pilot berth next to the companionway is it. Although the need for comfort has increased dramatically over the past decades, there are still sailors today who are happy with that.

Thus Gustaf was built with the usual concessions to human needs of the time, such as headroom under the vaulted roof, seating and sleeping accommodation on board. The square metre boat rule of 1925 contained accomodation just being fulfilled aboard. According to Per Thelander’s book Alla våra Skärgårdskryssare (All Our Archipelago Cruisers) from 1991, Gustaf is the first new construction of a 75 sqm boat since Bacchant II from 1936. This is not quite true, because as far as I know, two other 75-series were built for Lake Balaton in Hungary in the 1940s, Nemere and Scirocco.

The design, unrealised until 2017, comes from the successful regatta sailor and sqm boat designer Gustaf A. Estlander (1876 – 1930). At the time, Estlander owned or partly owned the Papst boatyard in Berlin-Köpenick, where the somewhat shorter Trumph (17.40 x 2.55 m) had already been built in 1921 according to the previous sqm rule of 1920. The new rule of 1925 demanded slightly wider, more stable and also heavier boats.

After the enthusiasm for the 40 sqm class, which had previously been in demand in the German Empire, died after the 25 rule and the yard burned, Estlander moved to Stockholm. The plans for this boat were then long forgotten. In search of a large sqm boat, Juliane Hempel, a yacht designer specialising in classics like metre class and sqm boats, brought the design to the attention of the owner and the yard. 90 years after the design, the filigree planks stood in front of the hall of the Martin yard in Radolfzell on Lake Constance in summer 17.

A matter of displacement

The boat was built and accepted as a true sqm boat in accordance with the globally valid regulations of the Svenska Skärgårdskryssareförbundet (SSKF). As Hempel reports, the construction of the boat was demanding. As an ambitious designer, Estlander had drawn it to the limit, i.e. as slim as possible, in favour of light air performance. At the same time, the minimum dimensions required by the rule and the weight had to be adhered to. In addition, there is the electric motor, which was not planned at the time, the two lithium batteries required for it and the shaft and propeller, which weighed about 200 kilos. Now, a slim and light boat can take practically no load. If it lies deeper than expected in the water, the length measurement oriented to the waterline stretches and it is not measured as a 75 square metre boat..

Estlanders preliminary design, consisting of five drawings, was completely reconstructed in 3D by Juliane Hempel. Added to this came the construction plans, a total of 65 drawings. A lot of work, which roughly took half a year. This at least kept the uncertainty of whether the boat under constrction would fit to the rule. Nevertheless, the worry remained until the end. Hempel, boat builder Josef Martin and his colleagues were anxiously awaiting the launching of the yacht, as calculations can only be confirmed on the way the yacht actually floats. To their great relief, it then turned out that Gustaf sits in the water as drawn.

The traditional construction method is also remarkable. It is a mix of mahogany planks over alternately mounted wooden and steel frames, with the wooden frames consisting of strips of acacia glued (laminated) in layers. 60 of these wooden frames hold the boat in shape together with the steel frames. The steel frames are L-shape sections made of stainless steel, which are stiffened amidships in the bilge, along the stem and towards the stern with additional plates.

The craftsmanship behind the rabbet

The precision with which the planks have to sit on the frames is demanding in classically planked wooden boat building. This determines the strength of the hull and also whether it remains tight and attractive in the long term. In the past, this was achieved with static friction between the planks and caulking. Today, the planks are bonded with epoxy resin. This results in a homogeneous and particularly resilient hull.

It takes some craftsmanship and practise to ensure that the planks end seamlessly in the stem at the front and in the stern beams and transom at the stern. Each end of the plank must sit exactly in the recess provided, called the rabbet. To do this, each plank end needs exactly the right angle, different each time. If a plank has been planed over its length at the wrong angle or cut inaccurately at the end, the boat builder has to put it aside and start all over again. This is the reason why classic wooden boat building of this quality is rarely done with apprentices, as is practised elsewhere. If the hull is finally painted, the gaps can be closed with epoxy resin and the filled area can be sanded. Gustaf, however, is a real, naturally varnished wooden boat, where the seamless fit of each plank with inlay-like precision a the rabbet was a prerequisite for the finish.

The boat’s equipment is a mix of handsome solutions such as the Spruce rig, a modern and, according to North Sails, particularly profile-stable 3Di sail wardrobe. Seen from distance its colour is somewhat reminiscent of the cotton look of old cloths.

Finally, let’s take a look at the weight of the boat. Although the displacement is one of many figures and just a number, it is a mostly overlooked detail that has consequences for the ballast percentage and the sailing characteristics. If the boat turns out as heavy as expected, the sail area will move the intended displacement instead of an additional half to 3/4 tonne. This is nice in light winds.

The ballast ratio is also interesting in this regard. According to the yard, the Gustaf’s ballast ratio is almost 51 per cent referring to the empty boat without crew and additional load. On the modern cruising square metre boat, it is at or below 40 per cent. So the construction method, materials and the insistence on the original plans are more than an anachronism.

Gustaf is thus reminiscent of the purist concept of the classy square metre boat as a racer from Anno 1927 and its designer Gustaf Estlander, whose work Knud Reimers continued with beautiful boats in Stockholm from 1930 onwards. It is also reminiscent of a craft rarely mastered to such perfection.

Thanks to Anette Bengeldorf/Friedrichshafen for the information about the boat and permission to publish her photos.