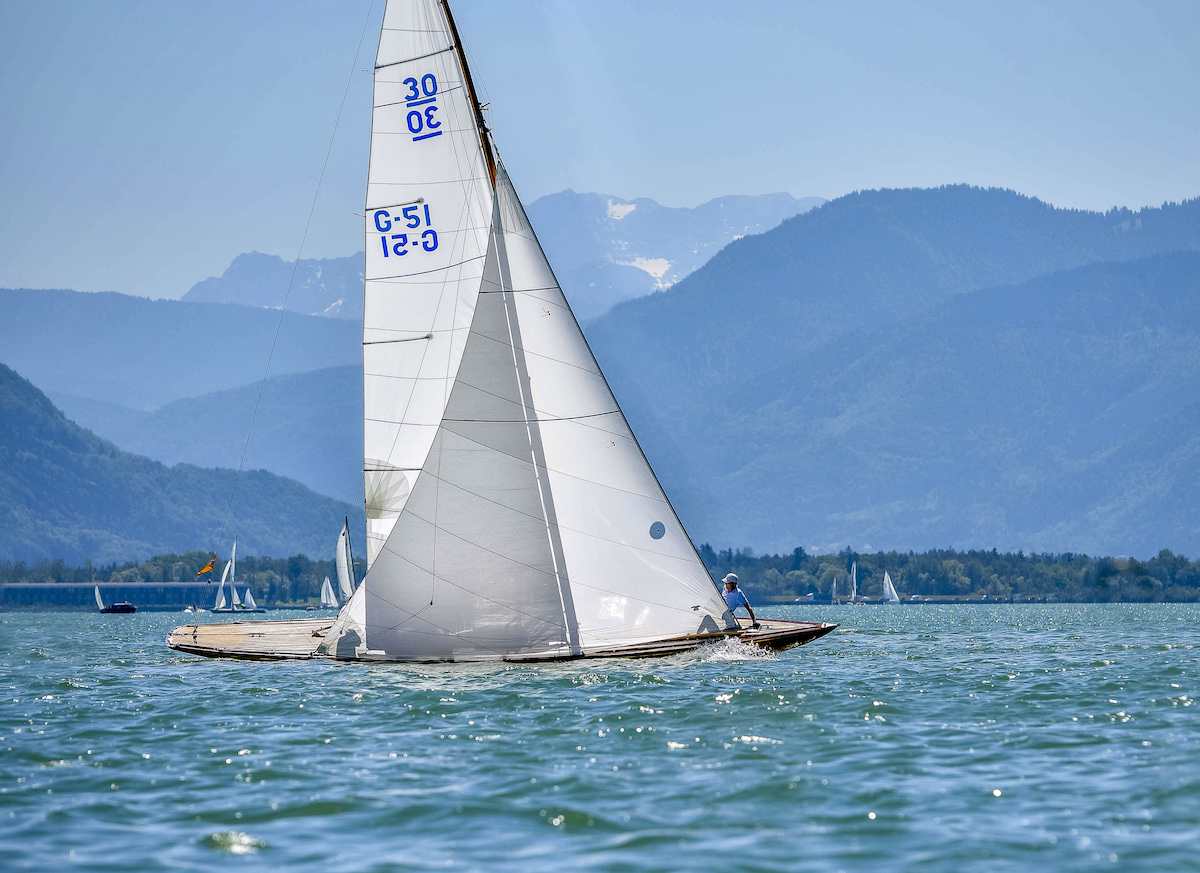 Unlike other sailboats, the classic square metre and their successors for cruising are designated by sail area instead of their length or a formula. For example, the 15 stands for the smallest 15 square metre class, the 22 for the 22s, and so on. If the designation number is underlined, as in the above photo of a 30, it is a measured and approved as a 30 square metre class.

How does this figure come together? As with the metre classes of the International Rule set up in 1906, the mainsail and 85 percent of the foresail triangle are taken into account. Initially, when most of the sail area was in the main and the rest in the forewing-like small jib, this approximated the real sails. Obviously the jib has a little more cloth than 85 percent of the foresail triangle. As in other life, there is a different value besides the nominal figure, the real one.

The actual sail area of a square metre boat

The ambition of a racing sailor being big, the Swedish shipowner Sven Salén brought a special headsail for the Coppa del Tirreno to Genoa aboard his 6 mR racing yacht May Be in 1926. It was considerably larger than the commonly known jib. But it was legal. Pulled sideways past the mast, it had the charm of significantly increasing the up wind sail area regardless of the sail measurement.

With this sail May Be was doing well in very light air at the regattas off Genoa. Thus the name of the new sail. The following year, Salén set his new sail at the Scandinavian Gold Cup in the American Oyster Bay. In 1930, the American sailor Elisabeth Hovey enjoyed her 30 sqm boat Oriole II off Marblehead with this light wind weapon. Besides that it seems remarkale that she was steering and the two lads took care of the foresheet.

A little later, Hovey brought the sail to square metre boat regattas to Kiel/Germany where it was always taken off board in the evening for safety’s sake. The genoa was so interesting that the areas of the main- and headsail were rebalanced aboard new sqm boat designs. The headsail area, which was taken into account with a factor of 0.85, was increased at the expense of the mainsail. In addition, the headstay was moved forward and attached higher to the mast. This added drive. As a precaution, the so-called headsail height was limited to 70 percent of the mainsail height in 1935.

The consequences of the Genoa

In light wind waters near the European Alps, the genoa has become indispensable – and larger. On many 30 sqm boats, it has become an almost isosceles triangle with enormous foot length. The clew is pulled all the way back – even behind the helmsman. As the Swedish square metre boat expert Olle Madebrink describes in the book The World of Square Metres, the genoa had consequences for the design of the class. They were now well better motorised and could be built longer. The length measurement is revealing in this regard. Measured 18 cm above the waterline, it grew from just under 9 metres to about 10 1/2 m from 1929 to 1952. The hull speed increased from seven to eight knots.

The geometric sail over the flat-borded hull is a wonderful sight. But the light wind weapon also has disadvantages. Visibility is limited. From an aerodynamic point of view, a slim and high-cut sail would be better. The genoa is unwieldy, subject to wear and expensive. And it limits the regatta sailor tactically. Every tack with this cloth slows down seriously. It takes time to get the boat going after a tack. So you are careful with you course, tactics and tacks. Some genoas even have two windows for a desirable view. You want to know if someone is coming and what Combatants are doing.

The Lindau sailmaker Markus Roesch reports that a typical 30-square-metre boat like the Bijou type is sailing upwind with 54 instead of 30 square metres. That’s the thing with the sail area aboard sqm boats. At first glance is seems simple, a closer look reveals it is as special as the prettiest boat in the world.

Photo above by Ulli Seer: 30er Dreamtime at the Chiemsee-Classic Regatta