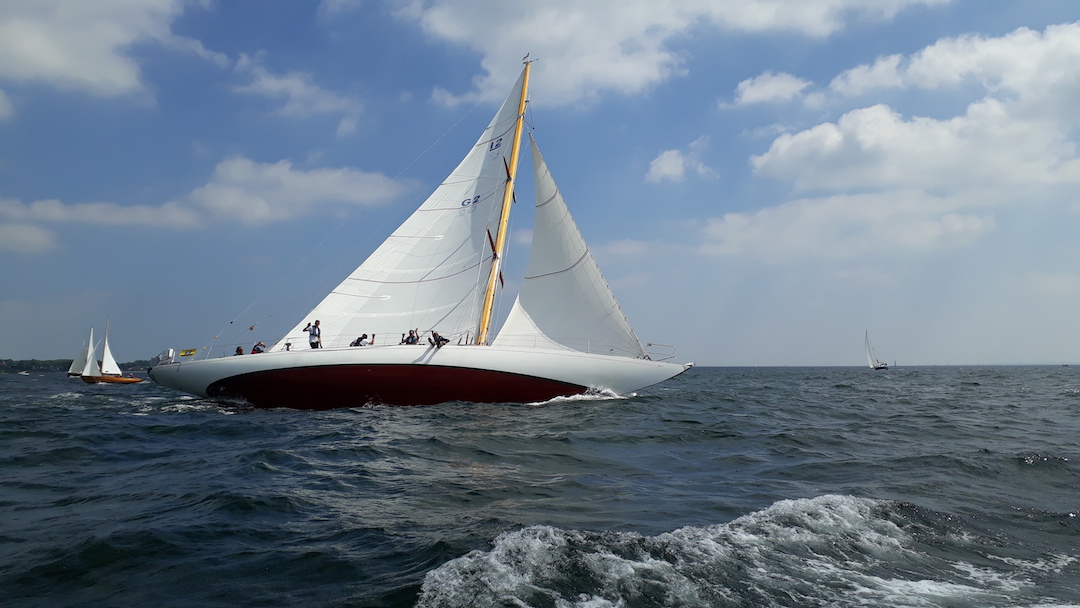 Is it sensible to race with a Twelve? This 22 m metre long upwind powerhouse with tremendous ballast ratio, driven by 240 Square metres? If you are sailing another Twelve – shure. With Swede 55 it seems pretentious. 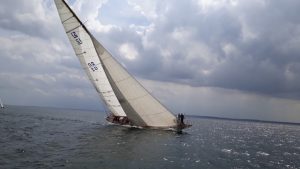 We will see the recently restored vintage 12 metre yacht Anita only briefly as her sails are sheeted in. Hence we enter the warm up course of the annual Max Oertz Regatta with advisable modesty. But we try our best with a brisk start. The tall vessel joins the race carefully, pushing majestic and steady through the smaller white triangles. What a sight! Second impression after anxious glances over the shoulder: Anita is going well, however does not seem unstoppable as feared. Humility already gives way to a bold goal: “Let’s see if we can hold her to the windward mark.” 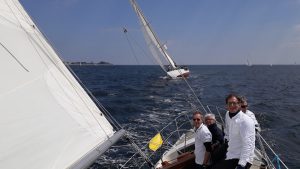 It works. With proper spinnaker handling, we even complete the first triangle ahead. But having passed the leeward mark the white sledge roars in from behind and rushes mercilessly ahead. Enraptured by the beauty of the spectacle, we watch it with a sense of destiny. It’s rare to witness so much class nearby in action.

The second race repeats the already known pattern. Cheeky start, first at the windward mark. Then the 27 tonnes plough past. However, the pecking order is not quite set in stone. The crew, Miguel and two Michaels from Berlin and Vincent from Cologne, is good. With the new jib from local sailmaker Arnd Deutsch, we are going high and fast upwind. 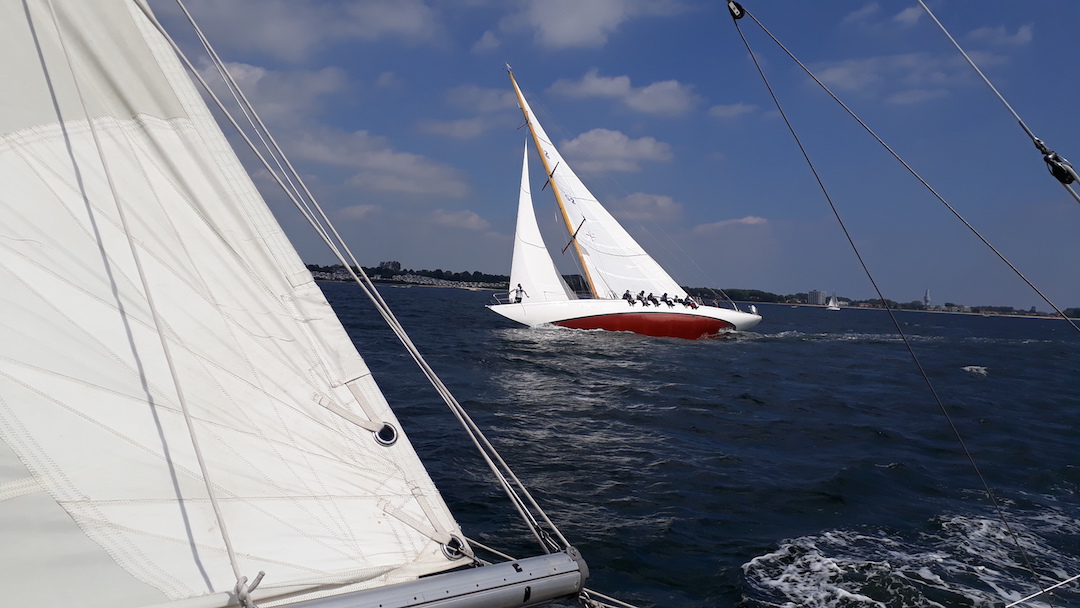 A nice tradition of the Max Oertz Regatta is the asparagus served in the evening by Manfred Miera in the temporary tent at the fisherman Square of Neustadt. Returning from the party around midnight I stop by at Anita, where the real party begins. Cold drinks, worser stuff plus musicboxes are distributed on deck. About ten young people gather in front of the mast.

Saturday morning Anita joins the race with a jib instead of the Genoa which made her heeling too much yesterday. Her 80 sqm jib alone is bigger than the entire upwind sailarea of Gamle Swede. We complete the first third of the classic triangle course 1 – 2 – 3 and the folling upwind beat ahead of Anita. No idea how, but this time we held the Twelve again. That America’s Cup boat class that goes upwind like an animal. The film shows the finish of the second upwind course. We are proud boys this morning.

Having rounded the windward mark, I make an awful mistake. On my request, we put the spinnaker pole on the wrong side. To fuck up the battle entirely, we unfold the 130 square metres too soon. Miguel hardly gets the partly filled cloth all the way up. First Michael gets his fingers in the spinnaker winch, then I get the little finger of my left hand trying to help him. Anita passes by unmolested, rushes to the leeward buoy, pulls up and drives away. All is blown.

To my big surprize Anita tacks soon after rounding the leeward mark, allowing us to sail uncovered in clean air with favourable shifts. We finish the decisive upwind leg well ahead, complete the second race and the entire Regatta on corrected time and in real life on the water.

Fotos and Videos by Vincent Volpe