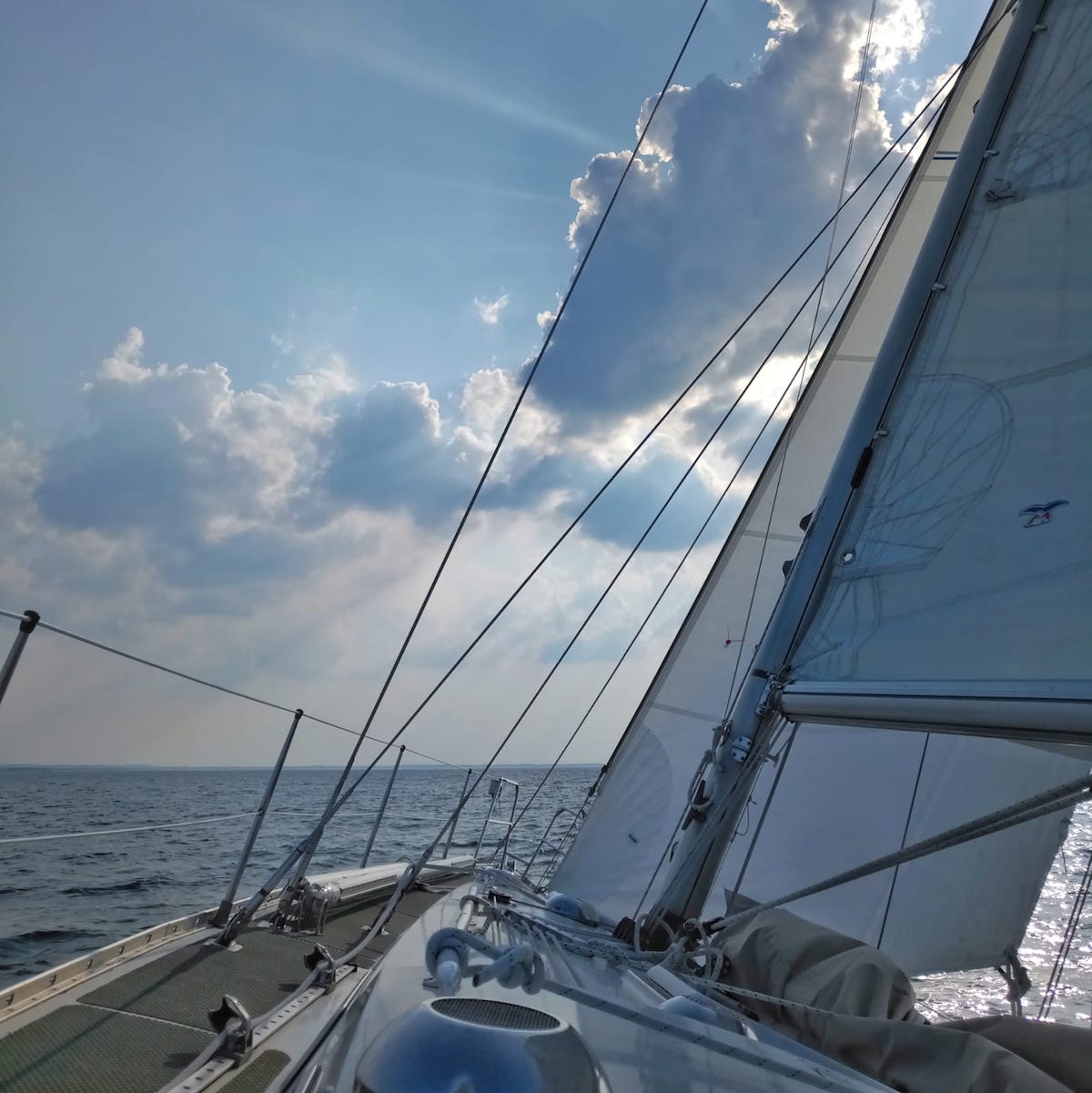 Does a blog post covering a single sail make sense? I think so, as sailing Swede 55 is mostly about upwind pleasure. For a long time I sailed Gamle Swede with an old jib. It was too small and really out of shape. Believe it or not: It was made by Canon in 1979. For that long you can use polyester cloth, also known by the brand name Dacon. You just have to be very kind to it: fold it almost every evening; keep it dry and give it to the sailmaker now and then. At some point I measured the old rag. I was surprized to discover that it had  24 square metres of the intended 30. With that 80 per cent jib, regattas were a fight with one’s own handicap. When the wind was strong, the boat heeled unnecessarily. When the wind dropped, it was necessary to switch immediately to the genoa to keep the boat going.

When I hoist the new jib in July 2018, I can’t believe my eyes. As discussed, it fills the area between forestay and spreaders to the centimetre. Sailmaker Arnd Deutsch has cut the sail to size. Further the sail is cut that the clew point does not sit at the stop of the hauling point, but in such a manner that the car can be moved to ajust the pulling angle. The new jib is made of heavy cloth and was sewn by someone who works carefully. I mention this because, in my experience with several sailmakers, it is unfortunately not common.

Its leech is stabilised like a mainsail with three battens and one continuous batten at the top. This is why the new jib can neither be furled as being common today, nor stowed in a bag like the old Canon jib. It disappears into a long tube in the evening. This is more work than winding the foresail around the forestay while pulling on the line of the furling system when approaching the harbour. Because the main thing here is to enjoy the sail and I don’t see the point of buying a new headsail every couple of years due to excessive wear and tear, I don’t have a furling system. With a little practice, the sail can be furled along the luff and packed in the UV protection within minutes in the evening on deck. It is quicker than laying the old sail in 1/2 m wide sheets and then rolling it up to fit the sail bag. The zip of the 4.30 m long tube is closed and the long sausage laid on the cabin roof.

When the Luebeck sailmaker Arnd Deutsch measured out the new jib on board in autumn 17, I wanted an oversized heavy cloth with plenty of reserve strength. I wanted a sail that could stay up in a lot of wind without being ruined. I accept the price for this, the stiff and unwieldy cloth, the weight and the effort of packing it away every evening.

Towards the evening of the first day with the new jib, the wind in Denmark picks up to a good five Beaufort. It almost pushes the deck into the Baltic Sea. Under the shelter of Aerø, we are sailing at 8 ½ to nine knots through mostly slippery water. That is hull speed. There is so much pressure generated that the foresheet can hardly be pulled with the Andersen 46 ST winch. Two days later, when we sail through the Danish South Sea around Tåsinge and tack against the current in the inland waters of the narrow Svendborgsund, we are as fast as the Danish motor cruisers.

In my experience only two things are certain when buying and repairing sails: the order confirmation and the invoice. Whether the sail has the ordered size, whether it performs as intended, whether the repair was done as agreed, is an open question. It is perhaps interesting in this context that I also advise boat buyers and owners. A sail is a made-to-measure product, where not only the basic data such as the luff lengths should be right. The quality of the cloth, the weight of the cloth, the cut of the sail and the workmanship must also be right.

So I am happy with the new jib. Needless to say, this is due to the years of privation when sailing Gamle Swede below par in little daily races or official regattas. If you dream of such a new sail for a long time, you really appreciate it. The boat already starts going in light air. From three bft onwards, I have the impression of sailing a new boat. The jib’s regatta premiere at the Max Oertz Regatta 2019 is delighting.

Post Scriptum: In autumn of 2019 I ask Arnd Deutsch whether the thimble can be removed to reinforce the clew with thicker cloth. He does not dissuss it with me as any Sailmaker I met would try. In spring 20 I pick up the sail with a strengthened clew without a second bill. Gamle Swede-sailstory to be continued.

Photo above by Carola Karsten, taken off Timmendorf/Insel Poel.